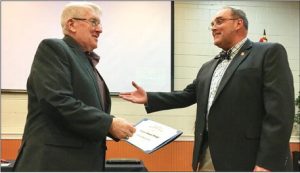 Lately, we’d had several photos of our Heroes in action in the Leavenworth Times.  For example, in the May 22, 2018 edition, Bro. Dick Wright appeared on page A2 receiving a War Wound Certificate and Wounded Warrior Coin from the Sons of the American Revolution at a Henry Leavenworth Chapter meeting. 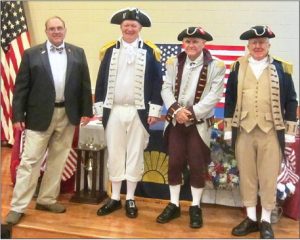 Then, in the June 8th edition, there’s Brother Dick Wright again on Page A2, at the Sons of the American Revolution, but this time with fellow Heroes of ’76; Brothers Vic Henke and Richard Schroeder.  They presented a history talk on the American Flag. 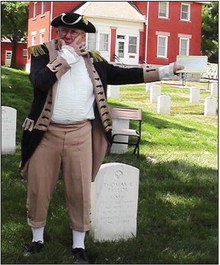 And, there is Bro. Dick again, this time trying to hide his face, but we know it’s him.  This was in the June 19th edition of the Leavenworth Times, page A2, Living History event with Bro. Dick near Henry Leavenworth’s gravesite in the National Cemetery on Fort Leavenworth.

And, one again, Bro. Dick appears in the Friday, July 13, 2018 edition on Page A2 receiving a certificate of appreciation from the Sons of the American Revolution for his portrayal of Henry

Leavenworth shown in the previous picture.

Thanks, brothers, for being visible and active in the community.  Big judos to Bro. Dick who has been a media super star.